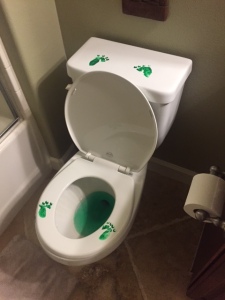 So everybody knows about the green leprechaun, but do you know about the history of the other colored leprechauns? Every year we go through this story with my son, it is so much fun leading up to St. Patrick’s Day, since this is one of our favorite holidays.  The legend of the rainbow leprechauns goes a little something like this (spoken in your best Irish accent):

Green takes all the credit, because, he is the oldest and the wisest!
The reason nobody knows about the other colors is they are not allowed to be seen.  I try to catch one every year, but all that is ever left behind are little colored footprints!  As they prove their worth through mischievous deeds, they can, over time, change colors to become green one day.
All of the different leprechauns are mischievous, it’s just part of their nature. They typically come at night, one day after another, each day before St. Patrick’s Day, when the Green Guy finally shows up. However, they have been known to show up two or three on a given night, just to try to cause more mayhem.  Every once in a while, although rare, they have even been known to show up during the day!
To get an idea of what these other leprechauns are like, let’s start with the blue leprechaun. He is a messy leprechaun. Just figuring out how to be a leprechaun and he leaves his blue marks everywhere. On the cupboards, on the floor, even in the toilet.  His intentions are good, but he just

doesn’t know how to control his blue yet.
The purple leprechaun is a risk taker. He is not shy, but is always doing something a bit extreme to get the attention of anybody that will watch. His footsteps are bold, and prominent and sometimes things get broken, not on purpose, of course, but by accident. And when he leaves a gift, sometimes, it’s a bit edgy and risky. And yes, it’s not uncommon to see purple sink and toilet water!
The red leprechaun is just curious. Always poking his nose, fingers, hands, or feet in places they probably shouldn’t belong. He typically leaves his little red gifts in these places as well. He is definitely in trouble from time to time.
The orange leprechaun is always is running late, typically missing the night time visits.  He is the king of procrastination.  Some feel he just likes to visit during the day and risk being caught, where others feel he likes to watch the kids behaviors during the day to make sure they are doing everything juuuust right! 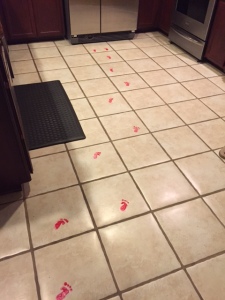 The yellow leprechaun is shy. You can barely see his footprints at times, and doesn’t want to come out in the middle of the room. He is always a bit hidden and difficult to find.  He always leaves gifts, yellow in nature, and they are difficult to find as well.
The green one, well… he is a combination of them all, the best definition for him is: mischievous. He is the craftiest, the wisest, the eldest, a risk taker, and definitely the biggest troublemaker of them all.  He typically leaves his footprints everywhere around the house. The toilet water is always green, the milk and other such foods are green, and he even seems to dance on the little kids faces from time to time leaving green dots all over their faces when they wake up.  Green is also the most fun!
So, that is the story of the rainbow leprechaun gang.  I hope to hear about their shenanigans around your house next year!
As you can see in the photos, they stopped by our house again this year!